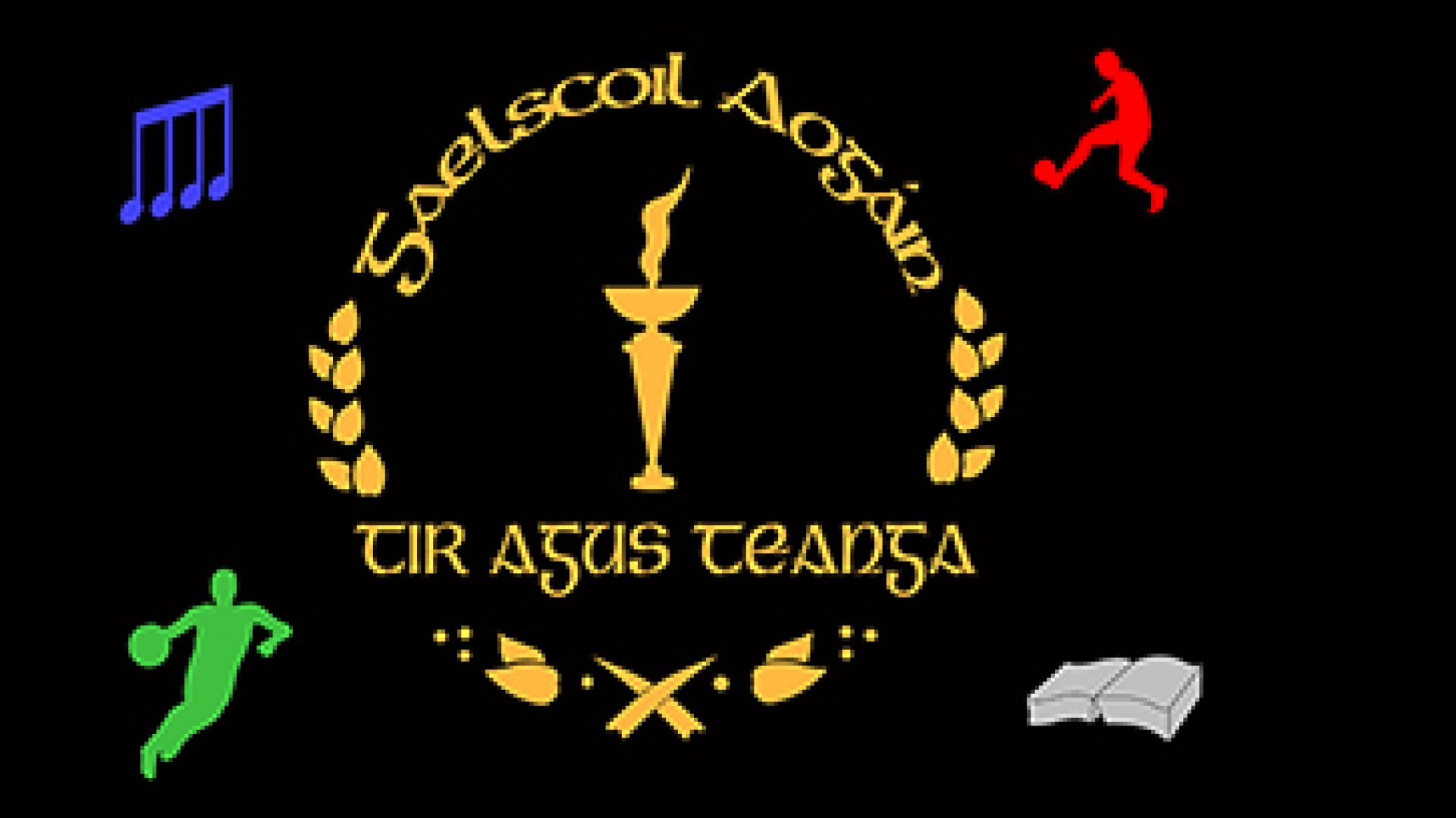 Arrive at School
Children should only arrive in school at such time as to enable them to be in their classes at 9.10 am.
The school is required to abide by strict rules regarding insurance cover for children. Accordingly, the Board of Management will not accept responsibility for children on the school premises before 9.10 am or after 2.50pm.

Staff Meetings
Periodically, during the year, the Principal and staff meet to review progress and ensure that the school continues to run effectively. There will be one staff meeting per term.

2. School Uniform
The uniform is very important for the image of the school and enhances your child’s association with Gaelscoil Aogáin. It also relieves parents of having to keep up to-date with clothing fashions.
The school uniform must be worn by the child at all times during school hours, except on the days when children have Physical Education or Swimming, when the school tracksuit may worn. Extra curricular activities provide an opportunity to promote the image of the school and so the uniform should be worn where practicable at all school-related activities.

School Milk Scheme:
Milk is available at a reduced cost. This provides your child with a third of a pint of milk daily. Details of cost will be notified each term.

4. Absences
All parents are asked to send a note to the class teacher if their child has been absent from school. Parents whose children have a doctors or dentist appointment should notify the teacher in the child’s homework diary beforehand and state the time of the appointment. Children cannot be allowed off school without a note unless their parents call to the school for them. In the event of an older member of the family calling for the child they too should have a note for the child’s parents. Children absent for more than 20 days will be notified to the National Educational Welfare Board.

5. Special Needs
Children may have special needs or may have a problem in the area of eyesight, hearing, speech, emotional state or any medical problem. It is important that the child’s teacher is made aware of any such problems.
Good liaison between the teacher and parents is particularly important when a child has special needs.
Parents should make reference to any special needs problems in the school enrolment form.

6. Parent -Teacher
It is the policy of our school that parents have access to the teachers and school Principal to discuss any aspect of your children’s education and development. If you wish to discuss such matters with your child’s teacher you are free to do so. You will appreciate that only a few brief words can be exchanged with a teacher while teaching a full class. However, if a longer discussion is required, please make an appointment by sending a note with your child’s Homework diary or telephoning the school office at 7142022, preferably in the morning when our secretary is available.

All aspects relating to your child should be discussed initially with his/her teacher.
The Principal is also available to discuss your child’s progress only after initial discussion with the teacher. The Principal is available between 9.10am – 4.00pm daily by appointment.

Parent-Teacher Meetings
An important part of the home/school links is the annual parent/teacher consultations. Usually after Christmas arrangements are made for each parent to meet with their child’s teacher individually to discuss his/her progress. Classes are let home early to facilitate this arrangement.

7. Physical Educatcation
Physical Education classes are conducted by the class teacher. Children who show up on P.E day without suitable clothing will not be allowed participate. Children can wear their school tracksuit on P.E day.

8. Equality
Our policy is to afford equal access to all sections of the curriculum to both boys and girls to ensure that there is no discrimination on the basis of gender.

9. Extra Curricular Activities
An important policy of the school is that pupils should have available as wide a range of activities as possible, both within school hours and after hours. After school activities are usually conducted by the teaching staff in their own free time and on a voluntary basis. Their efforts, on behalf of the pupils are much appreciated by the school, parents and by the pupils themselves.

Sport:
There is a strong emphasis in the school on sport. Participation, fun and correct attitudes and skill development rather than winning are the important objectives of the school. Success, when it occurs, is of course welcome and the school has achieved a large degree of success in recent years.

Basketball Coaching:
Coaching in the skills of Basketball is organised during the year. A circular outlining timetables for the above activity will be sent to all parents concerned at the beginning of each school term. The school has participated in many basketball blitzes over the past number of years.

Gaelic Football Coaching:
Coaching in the skills of Gaelic football takes place during school hours with Jack O’Connor and Micheál Quirke. Our teams have participated in Cumann na mBunscoil over the past few years.

Swimming:
Children from 1st to 6th class can avail of swimming classes after school hours through the school.

Athletics:
Our athletes represent the school through at various events during the year.

School Choir:
Music is an important curriculum subject taught to all pupils. There is a school choir. This choir enhances important activities during the school year when singing is required, e.g. First Holy Communion, Confirmation, or the funeral of a person closely connected with the school (if requested).

School Band:
Many musical instruments are taught in the school such as fiddle ,guitar, piano and flute.

Computer Room:
Children are allowed hands-on experience with our computers, encompassing a variety of CD Rom software. Each class now has an interactive whiteboard.

10. School Books
A rental scheme is in operation in the school from Rang II to Rang VI. The purpose of this scheme is to keep parents expenses as low as possible. It also has the advantage that a far greater range of up-to-date textbooks are available to each pupil than would otherwise be the case if pupils directly purchased school textbooks.
Parents will appreciate that the management of a rental scheme which is for the benefit of parents and their children involves a considerable amount of organisation and control. It is also an additional burden on the school staff. Parent’s co-operation is essential.
Participation in the scheme requires parents to:
Ensure that all books are carefully covered and the child’s name is written on the cover.
If a book is damaged or lost—to replace it with a new one.
To pay promptly for the books as no child will receive any books without prior payment.
An account is taken of all the books that are rented and their condition is monitored during the year. We have noted that some pupils take less than satisfactory care of the book. Accordingly, a few pupils may have to be disqualified from availing of the rental scheme.
Its continuation, therefore, depends on the co-operation received in its operation.

11 Home work
Homework is very important for the education of each pupil. It revises and develops work already done in school and allows children to study at their own rate in their own surroundings. It promotes good work habits which will help in secondary school and in later life. This independence and acceptance of responsibility is a very important part of the child’s development.
Most parents are aware of the importance of homework and so take an active role in this aspect of their child’s education.
How you can help:
• Organise a definite time and place for doing homework each evening.
• Encourage your child to do his/her homework at a regular each evening, preferably early.
• Take an active interest in the homework and schoolwork your child is doing. This helps to make your child realise that school is very important. Ask questions about homework.
• Especially in Junior classes – help as much as possible.
• Listen to reading, spelling, tables etc.
• Check written work and encourage children to be neat and tidy and to have pride in their homework.
• Sign the homework diary when the work is completed.

• Sign and acknowledge any notes written by the class teacher/principal.
It is important to realise that any comments are written out of genuine concern for the child’s progress and behaviour.

12. SCHOOL DISCIPLINE
Each child coming to school has a right to expect an atmosphere where he/she can learn, play and feel safe. To ensure this right, a cope of discipline has been drawn up. A school code of discipline policy document is available to all parents. Copies are now available to all parents and must be signed by all.
This code was drawn up by the Principal and teaching staff, approved by the general body of parents and parents’ association and ratified by the board of Management.
The children are all aware of the rules and the type of behaviour which is acceptable and unacceptable. In general, most children respond well to these rules. They feel more secure and more confident in a situation where they know what is expected of them.
It is important to stress that school is a place where work is done and children are educated. It is not a minding service for children.
Discipline encompasses every aspect of school life. Correct attitudes towards homework, punctuality, wearing of school uniform, litter, respect for property are all important. Misbehaviour in the classroom or yard, bad language or bad manners will not be tolerated.
At all times respect for authority is expected. In the classroom situation, it is unacceptable that any pupil should disrupt the working of the class. Where continual disruption is caused, the disruptive child will have to be isolated or removed from the class so as not to deny the other children the right to learn.
Some parents may not be aware of disruptive effect that their child may have on a class. However, when made aware of this fact they should take steps to ensure that their child behaves in future and monitor his/her progress by supervising his/her homework diary for notes and visiting the school frequently.

13. GAEL SCOIL AOGÁIN PARENTS’ ASSOCIATION
Since its inception in 1995, our Parents’ Association has gone from strength to strength. Membership of the association is open to all parents or guardians of children enrolled in the school. A committee is elected each year at an A.G.M, usually held in September. The parents’ Association’s contribution towards school life is invaluable. Its members organise and support many extra-curricular activities both educational, social and recreational which greatly benefit our pupils.